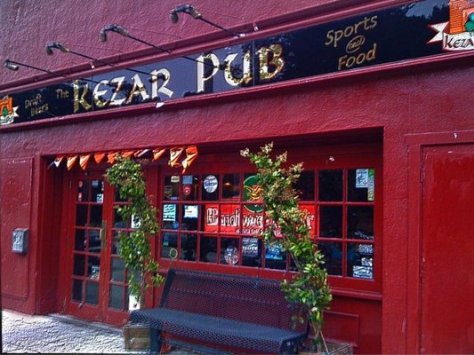 San Francisco is a good sports town. The Giants and 49ers consistently sell out, even during disappointing seasons, and most any bar or restaurant in the city is sure to have a TV or three with a game on. But when you absolutely positively have to watch your team, a sports bar is where you need to be.

Here’s a rundown of the best sports bars in San Francisco:

Kezar Pub
770 Stanyan St.
(415) 386-9292
This place was probably a sports bar even before television was invented, with men in tams sitting around the wireless listening to play-by-play of the San Francisco Seals while quaffing pints of Anchor Porter. In other words, Kezar lives and breathes sports, a fan-friendly venue full of character that does ‘sports bar’ better than anyone in the city. It’s well-aged with an Irish pub ambience, low ceilings and plenty of monitors near tables and seats, so you’re always close to the action even when the crowds arrive. They have good burgers and pub food too, and a wide selection of beer on tap. Bonus points for being a stones throw to Kezar Stadium in Golden Gate Park, where the 49ers played until 1970.

Mad Dog in the Fog/Danny Coyle’s
Haight and Steiner
(415) 626-7279/(415) 558-8375
I mention these two together because they’re both hard core Irish sports bars with all the Premier League you’d care to watch, and they’re a block away from each other in the Lower Haight. So if they can’t get your game at one, you can simply stumble over to the other. If you love soccer or rugby, you won’t be disappointed. But you’ll find all sports at these places as well, and with a fun and lively atmosphere. BONUS: Toronado, with the biggest and best beer selection in the city, and several wide-screens as well, is located across the street (next to Rosamunde, for the best grilled brats and sausage).

Jillian’s
101 4th St
(415) 369-6100
With a wide screen to rival the nearby cineplex, this SOMA sports bar is the place to watch that big game. World Series, Superbowl, Final Four, that’s what the crowd has come for, filling up booths and tables in the spacious dining room that points to the giant screen above the bar. For just regular football Saturdays or Sundays, they’re able to project several games at once on the main screen and on normal wide screens throughout the bar. Food is a step up from pub grub and there’s an adjacent billiards room with 10 or so tables. Jillian’s is part of a small national chain.

Public House
24 Willie Mays Plaza
(415) 644-0240
A shiny modern bar/restaurant, Public House is part of the AT&T stadium complex and is a great spot to catch the Giants if you can’t get tickets but still want to be part of it all. There’s no shortage of screens, and lots of space, so they can usually get any game you want. Mijita is adjacent for great Mexican food.

Giordano Bros.
303 Columbus Ave.
(415) 397-2767
As it says on their website, “if sports aren’t on when you come to Giordano Bros. someone is getting fired.” This smallish North Beach bar actually promotes its excellent ‘all-in-one sandwiches’ more than anything. But it’s owned by two ex-Pittsburghers which means you can count on catching your game on one of six wide-screens, unless of course the Steelers are playing – the place was proclaimed as the Official Steeler Bar of San Francisco by the Pittsburgh City Council. Another North Beach option is the Northstar Café on Powell and Green.

Yancy’s Saloon
734 Irving St.
(415) 665-6551
If you’re trapped in the inner Sunset, your best bet is Yancy’s. It’s a roomy and unpretentious bar, plenty of seating and good for watching a game. An easy place to spend an afternoon or evening with friends over beer.

Bitter End
441 Clement St.
(415) 221-9538
There’s several beer soaked Irish/British bars in the Richmond that are decent sports bars, but the Bitter End may be a hair above the others. It has a bit more atmosphere, and is a little more comfortable for watching a game. There’s seating upstairs as well, and pool tables and darts just like a real British pub. Note: if Premier League football or rugby is your thing, head around the corner to the Abbey Tavern on Geary. Update: I recently wandered into Bitter End on a college football Saturday, and the place was dead. Good, because you won’t have competition for the game you want, but bad because it’s depressing to sit in a near empty bar on a Saturday afternoon.

Knuckles at the Wharf
555 North Point St.
(415) 563-1234
This is your standard and slightly trendy hotel bar/restaurant, but they have lots of screens, some in private booths, and are willing and able to dial in your game of choice. One especially nice touch that you won’t find anywhere else: the individual wireless speaker they set down in front of you at the bar or table, so you can listen to the play-by-play.

Lefty O’Doul’s
333 Geary St.
(415) 982-8900
Sure, you can watch games here, but I mention Lefty’s mostly because it’s a shrine to San Francisco’s rich baseball history, including the bar/restaurant’s namesake founder Frank “Lefty” O’Doul, a San Francisco native who played professionally in the 1920/30s and later managed the Seals.