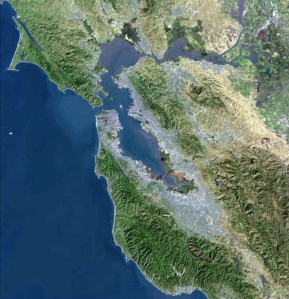 So what do you consider ‘Bay Area’? I’m never quite sure how far the border extends, what to include, what to leave out. It’s like neighborhoods in the city: where does the Upper Haight end and Cole Valley begin? Logically, I’d consider the Bay Area to be made up of suburban and metro areas. In the North Bay, that would mean it ends at Novato. The South Bay would end at San Jose. East Bay, the towns along the 680 like Danville and Walnut Creek.

Officially, ‘Bay Area’ includes everything within the nine counties that surround the city of San Francisco (including San Francisco County). Some include/exclude Sonoma County, and others Santa Cruz County. Either way, it seems a stretch to include the town of Cloverdale way up north of Santa Rosa, or the remote reaches of northeast Napa County above Lake Berryessa. I know Gilroy is the last stop on the CalTrain line, but it’s always felt more central valley, or central coast. And while Santa Cruz is officially part of Monterey Bay, it’s a short jaunt over the hill to San Jose and easily fits with the Bay Area.

Of course, this being Northern California, nobody’s going to get too uptight about official Bay Area borders.  However you slice it, we’re all part of the NorCal Republic.