Yes, those are Rodin’s in the garden (Rodin!), lots of them, sprouting up from the ground like mushrooms after a rain. And of course they’re free to view, to even touch I suppose, though the thought never occurred to me (until now) out of reverence for the art and artist.

What’s also free is entrance to the adjacent museum, the Cantor Arts Center on the campus of Stanford University in Palo Alto. This is no dusty university museum with esoteric artifacts or moldering stuffed animals in dioramas. The Cantor center is a vibrant art museum with excellent permanent collections and featured exhibitions any museum would be proud to host. I recently visited for the show on photographer Walker Evans, displaying works from the full breadth of his 50-year career, including a number of his most iconic photos from his work for the Farm Security Administration documenting the effects of the Great Depression. There’s also a series of extraordinary photos Evans snapped surreptitiously in the New York subway in the late 1930s.

The museum has 24 galleries housing collections that span five millennia, from ancient China and Egypt to the present – there’s a little bit of a lot of different things. And while it can’t compete with the size and volume of SFMOMA or de Young, it does well given the space it has, and actually compares in size and scope to the Legion of Honor. The Asian art is on par with what I’ve seen at the National Palace Museum in Taiwan (just not as much of course), and contemporary artists currently on display include heavyweights like Edward Weston, Frank Stella and Richard Serra.

But back to Rodin. The museum houses the largest collection of Auguste Rodin sculptures (400) outside of the Musee Rodin, including the 20 on display in the Rodin Sculpture Garden. Inspired by Michelangelo, Rodin was a realist and a naturalist, infusing his pieces with emotion and character; this at a time when French sculpture was largely ornamental or honorific. As a result, he suffered sharp criticism of his work (which was prodigious – he was incredibly prolific) through most of his career. Thankfully he stayed true to his vision. He’s now the most famous sculptor of the modern era, with stunningly beautiful works that never fail to inspire.

And some of his greatest pieces are here for all Bay Areans to enjoy. Spend time with The Thinker, his most famous. Anything but a figure at rest, but straining and fraught, it turns the act of thinking into a physical endeavor. There’s the six Burghers of Calais, commemorating the men who offered their lives to save the townspeople from an invading king, and were pardoned at the last moment. Instead of a defiant or unified front, he depicts each of them lost within themselves and struggling in their individual way with their impending doom. And then there’s the Gates of Hell, an enormous work depicting scenes from Dante’s Inferno; the panels seem alive with the motion of figures writhing in agony. 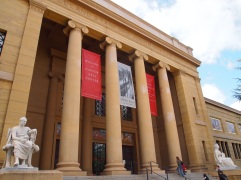 For residents on the Peninsula, the Cantor Arts Center is an important part of the cultural life of the community, and worth the trip for anyone in the Bay Area. The highlight of course is Rodin. But the other collections are certainly worthy of viewing as well. And did I mention it was free?