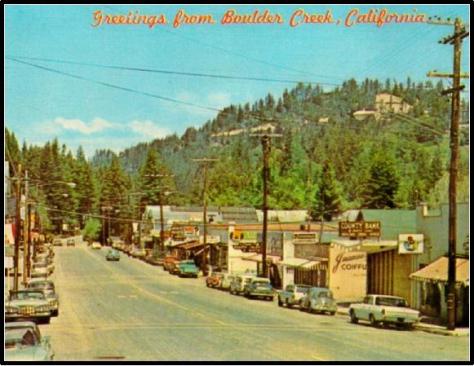 I have a friend who’s up and moving to Boulder Creek at the end of the month, which inspired me to finally make a visit to the town this past weekend. If you don’t know, Boulder Creek is in the Santa Cruz Mountains along Hwy 9 about 15 miles north of Santa Cruz, or 22 miles south of Saratoga. It’s definitely out of the way, which is part of the appeal. There’s no easy way to get there, unless you’re a crow, but probably the easiest is to drive south on Hwy 17 and cut through Scotts Valley. (Tip: If it’s a sunny weekend day, expect lots of traffic heading to Santa Cruz beaches). You’ll pass through other small towns after turning north from Scotts Valley, from Felton to Ben Lomond to Brookdale, before hitting Boulder Creek, all old logging towns from the late 1800s. Mostly you’re driving through redwood forest, with houses spotted here and there off in the trees. 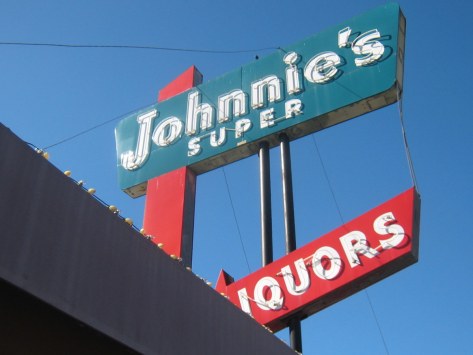 You could almost consider Boulder Creek part of the whole Santa Cruz area, since there is a slight but continuous thread of civilization running up that way. But as the last town on Hwy 9 before it trails off into the redwoods, Boulder Creek feels apart; its own town with its own identity. I’m trying to think of other towns in the bay area to compare it to, but nothing in Marin, Sonoma, or elsewhere comes to mind. And it’s kind of the anti-Point Reyes, or maybe Point Reyes 30 years ago. Which means the foodies or the fancy city people have yet to arrive, at least not in large numbers. Or if they have, Boulder Creek has converted them to the ways of the mountain, not the other way round. 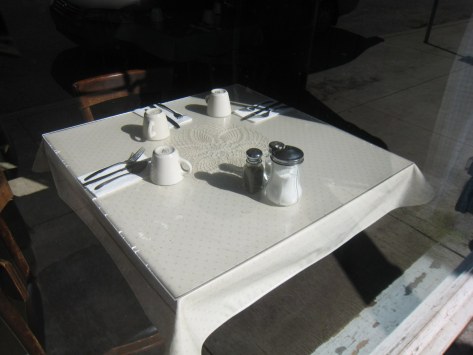 It feels like a town that has changed little in the last 40 years or more, starting with Johnnies Super Market that looks straight out of 1957, original neon sign included. There’s a huge old five and dime type store that’s also a bygone relic, two unfancy coffeehouse/cafes, sushi restaurant, lumber yard, couple antique stores, a pizza joint in an old theater, a breakfast/lunch diner also a throwback, and Joe’s Bar complete with a barber chair in front of the juke box (I suppose for the slow deciders/too drunk to standers). The only places that look somewhat modern are a martial arts dojo and a New Leaf market, which is a Santa Cruz-based health food store chain, like a junior Whole Foods. There’s only a few streets off the main drag, with old Victorians and people driving funky old VW bugs and Jeeps. The one thing I wish were different is the traffic through town on Hwy 9, which is too busy for such a laid-back town. 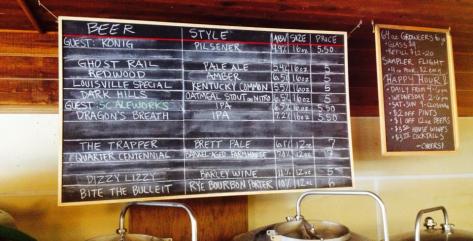 The one place I definitely wanted to check out was Boulder Creek Brewery. I love all things beer, and especially places that brew it themselves. I kind of expected a newish fancy place, but the brewery has been there for 25 years according to the bartender, and had obviously never been touched by the hand of a designer. There’s lots of wood-grain, and a nice wood bar with the steel vats of beer behind, and skylights overhead. The restaurant area separated from the bar and serving brewpub-type food (burgers, etc.), in case you have kids. And there’s only two TVs in the entire place, which should tell you how old school it is. But the best part is the beer. I tried The Trapper, a light amber Brett ale that was perfectly balanced in body and flavor, no overpowering hints of whatever (hops, citrus), but still with a well-blended full flavor. It had the right level of alcohol too, with a 6.1% ABV. An incredibly drinkable beer. The same could be said for the Ghost Rail pale ale. Very drinkable, balanced and flavorful. And since it was happy hour, just $3 a pint. And with a revolving slate of new arrivals, there’s plenty of reason to come back.