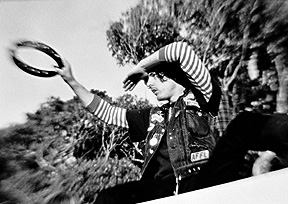 Human Be-In 2012
I wasn’t around for the first Be-In in 1967, prior to the Summer of Love, so I wouldn’t mind checking out this one. Of course, times have changed a smidge, so this event will be smaller and absent any zeitgeist, and maybe a few other things, like the buckets of LSD poured on the proceedings. I like the fact that it’s not official (i.e., no permit), in the spirit of the original, while organizers are inviting all comers to “teach a workshop, facilitate a discussion, share a skill, play music, make art, cook a meal, or simply be.” Sat and Sun, 12-9pm, Frederick at Golden Gate Park.

56th annual Mill Valley Fall Arts Festival
56 years?! They get a shout out for that alone. And the setting can’t be beat, amongst the giant redwoods of Old Mill Park at the foot of Mt. Tam. Though the $10 admission gives me pause. Still, a summery day in Mill Valley is hard to beat. Sat and Sun 10am-5pm.

Film Night in the Park – The Graduate
During my college years, me and a few buddies used to watch The Graduate every semester at the start of finals week, which always seemed somehow appropriate. The film never got old then, and it doesn’t now. Sat 8pm, Dolores Park.

San Francisco International Dragon Boat Festival
This is the perfect San Francisco event, especially on what promises to be a beautiful late summer weekend on Treasure Island. And this being the year of the dragon and all makes it that much more auspicious, with 130 teams, entertainment, a kids activity center and lots of food vendors. Sat and Sun 10am-5pm, Treasure Island.

San Jose Arts and Crafts Fair, San Pedro Market
The best (and only) thing about downtown San Jose worth making a trip for. The San Pedro Square Market was modeled after Pike Place in Seattle, a mini version with a fancy food court and an outdoor plaza for live music and run-around space for kids. 10am-4pm.