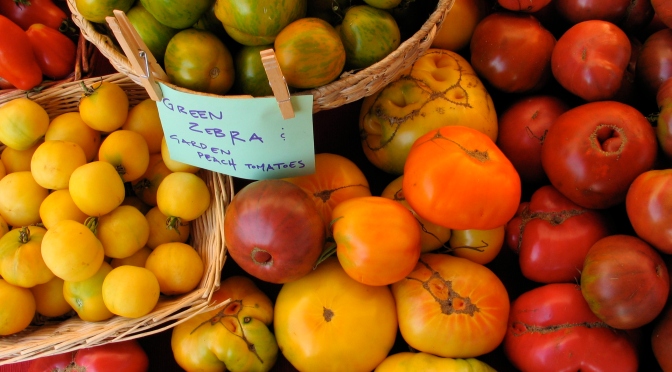 For the uninitiated, the Mountain View Farmers’ Market can seem almost overwhelming. Several long rows of white tented booths stretch the length of the Caltrain parking lot near the Peninsula town’s commercial district, with one table after another overflowing with an endless array of fresh and colorful fruits and vegetables, in varieties even the most knowledgeable gardener may marvel at.

On a recent Sunday, visitors sampled slices of oranges (blood, navel, Valencia, etc.) and pears (Asian, Bosc, Bartlett), while filling up bag after bag of produce grown and harvested in nearby farms. The biggest questions for most is where to start, and how much they’ll be able to carry.

This impressive variety is one reason farmer’s markets are so popular in the Bay Area, made possible by the close proximity of so many farms cultivating such a wide array of produce. From San Jose’s Blossom Hill to Los Altos and downtown Santa Clara, farmers’ markets are a thriving business because farmers are less than a two hour drive away.

Prepared foods, live entertainment and a palpable community spirit are other reasons people are flocking to the area’s farmers’ markets, and why 8 percent of the market’s visitors are traveling from San Francisco to Mountain View. “Where else can you go and have 75 farms at your fingertips,” said Gail Hayden, director of the California Farmers’ Markets Association.

Hayden is also quick to point out all the other quality farmers’ markets in the South Bay and Peninsula. “Saratoga Farmers’ Market at West Valley College is my favorite, and that’s 75 farms on a slow day,” she said. “It has some amazing organic farms that come in with things you would never see unless you grow them yourself, like some very interesting beets and carrots.” Hayden also said the market’s pastured eggs are worth going out of your way for: “when you eat their eggs, it tastes like an egg.” She adds that the almond flour (and gluten-free) baked goods are both delicious and protein-packed.

Farmers’ markets in the area are able to offer a variety of year-round, local produce largely because of geography. “San Jose is a unique area because it’s close to three microclimates,” said Hayden. “Apples come from the mountains, lettuce from the coast, and hot crops from the valley.”

In fact, it was California where farmers’ markets got their start in 1977, when up to 4,000 people were driving out to farms to buy produce each weekend. With the era’s energy crisis in full bloom, Governor Jerry Brown had the idea of bringing the farmers to the city as a conservation measure.

Hayden also cites the Blossom Hill Farmers’ Market at Ohlone-Chynoweth VTA station on Sundays from 9 a.m. to 1:30 p.m., open year-round rain or shine. “And the Los Altos Farmers’ Market on Thursday night does a kid’s booth,” said Hayden. “Only kids can go in, and they get fake dollars to buy a peach or nectarine. They love it.”