If you need a reason to visit Napa besides the fine wine, (and food, and scenery), then consider the region’s architecture. With budgets, sensibility and vanity more than plentiful here, it’s no surprise the valley’s successful winemakers have constructed some wonderful buildings to match their world-class wines. It’s also a business decision, bolstering their brand’s image while competing in an industry increasingly veering toward hospitality.

Here’s six of the most interesting: 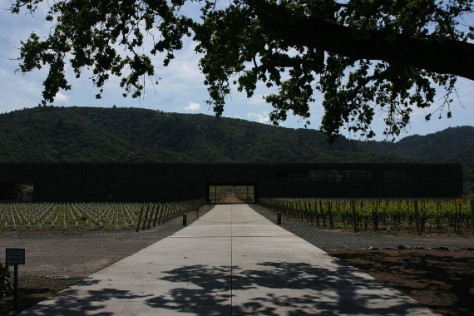 Dominus Estate
If you blink, you’ll miss it. Actually, if you’re driving around specifically looking for it, like me, you still may miss it. And that’s part of the idea for this Yountville winery just off Hwy 29, which architects Herzog & de Meuron designed to blend seamlessly into the landscape. From a distance (or even up close) it hardly looks like a building at all, but a structure someone less cultured might call a pile of rocks. But stay with it a minute and it really is quite striking in a naturalistic way, adapting to the changing light of a passing cloud and the angle of the sun throughout the day. The outer shell is made of large black basalt rocks from nearby quarries and held together in wire nets (or gabions, used in the architects’ native Switzerland to fortify river banks). From inside, the effect can be dramatic, with light filtering through spaces between the rocks, while providing a natural insulation from heat and cold. It’s stylistically very adventurous, very avant garde, very Herzog & Meuron, who also designed the de Young museum in San Francisco.

Artesa
Another modern design that incorporates natural elements, Artesa Winery also has the wonderful advantage of being located on a hilltop overlooking the rolling pastoral landscape of the Carneros district. You can even see the bay in the distance on a clear day. Architect Domingo Triary of Barcelona chose not to compete with the stunning panoramic views, instead setting the structure seamlessly into the hillside, berm-like, with fountains that complement the naturalistic theme. The interior has the light and open-air feeling of a Mediterranean courtyard. While an inner atrium is like a glass-walled meditation room, housing a pool and sculpture piece. If buildings were wine, Artesa would be a crisp, golden-hued sauvignon blanc that dances on the palate like bottled sunshine.

Opus One
Visiting Opus One winery in Rutherford is like going to the opera. In fact, much of the interior and furnishings have the feel of a modern European opera house, which makes sense considering the brand’s musical pretensions. The building has a circular design with very soft, elegant lines throughout and a trellis-covered walkway around the inner courtyard. And while the neo-classical exterior takes its inspiration from 16th century Tuscany, the interior is contemporary. Like Artesa, there’s a berm-like slope along much of the buildings outer rim, but here it’s meant to be conspicuous. The most prominent feature of the structure is a circular metal tower sticking up from the center of the building, resembling a hat worn by Italian artists during the Renaissance. It’s a design that pairs well with a $100-plus bottle of Opus One wine, but still cheaper than a choice seat at the opera.

Castello di Amorosa
Interesting in an eyebrow raising way, Castello di Amorosa looks time-traveled directly from the 13th century. It could be a museum, or a theme park, and it’s definitely an events venue for the Ren Fair crowd. Owner Darryl Sattui of V. Sattui Winery was inspired by his regular trips to Italy and the old castles and estates he visited on his ramblings through Tuscany. He set out to replicate the same thing in the hills south of Calistoga, obsessing over imported bricks and stones while also importing the Italian artisans to work on it. The several levels below ground are a labyrinth of meandering hallways, wine caves and faux bricked-up doorways, which is meant to resemble a real castle as it changes over the centuries. There’s also a prison cell and torture room for further authenticity, and unruly visitors.

Clos Pegase
I’m not a fan of Michael Graves, but I’m including it because the winery’s owner, Jan Schrem, swung for the fences when the place was built in 1987, which makes it worthy of mention. Schrem wanted to make a statement, to build a temple to wine and art, and Graves was chosen out of a field of 96 from a competition sponsored by SFMOMA. Like many of Graves’ works, the winery hasn’t aged well, which has the look of a modular Mediterranean estate put together with Legos, a sort of goofy neo-classical with an ‘80s sensibility. But he did get the courtyards and interiors right, which are both open and intimate like the best Tuscan villas. Schrem was one of the first to bring architecture – and an early starchitect – into the equation in Napa, which has inspired other vintners to follow suit.

Merus
This winery has such a wonderfully modern interior, with an exciting contemporary design that really stands out from the many rustic and traditional wineries in the region. The loungy use of ambient lighting sets the tone, and the designer lighting fixtures, column/pedestal cocktail tables, modular couches and onyx-black communal tasting tables gives the place a decidedly cool, hip vibe. Lots of very clean and photogenic lines here. But there’s enough rustic touches – a bridge of sorts – that makes it fit with the overall rural setting.